Is Alaska Overdue for the BIG Earthquake? 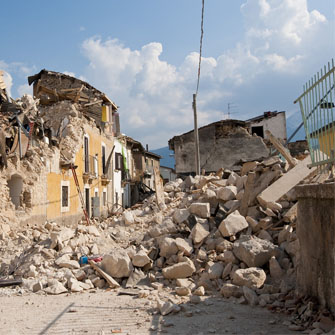 A sudden release of aggressive or violent ground energy is called an Earthquake. The shifting of the earth’s crust or a magmatic activity causes an Earthquake. It occurs when the crust is being pulled apart, compressed, or two sides of a fault moving sideways or past each other.

Why Do Earthquakes Happen?

Earthquakes happen whenever a rock underground suddenly breaks along a fault and causes seismic waves that make a ground shake because of the sudden release of energy. The two plates or blocks of rock are roughly rubbing and sliding against each other. Each rock is pushing against each other without moving. After a few moments, all the pressure that has been built up will cause the rock to break wherein an earthquake occurs.
During an earthquake, the plates or blocks of rock will continue to move until it gets stuck again. The focus of the earthquake happens in the spot underground where the rock breaks. Moreover, the epicenter of the earthquake is placed right above the focus or on top of the ground.

Why Does Alaska Have So Many Earthquakes?

Faults mark the boundaries and these boundaries show up as cracks in the surface of the earth while the rocks slide past each other. The faults in Salcha, Fairbanks, Minto, and Denali are all impartially active.

Since Alaska is on the Pacific Ring of Fire, it is considered as one of the most tectonically active places on earth. The country’s position above the two moving plates results from the Pacific Plate thrusting beneath the North American Plate while the other faults that are active make the state in a constant threat.

Alaska has also been experiencing changes in the environment that gradually increases seismic activity around the country. Due to its climate change, earthquake activity increases because of ice loss.

Over the last 100 years, ice fields in Alaska have lost a vertical kilometer of ice that has lead to faults move easier because of the reduced load on the crust beneath. Earthquakes occur when faults move, thus, makes it impossible to predict when a quake will happen on a particular date and fault. Return periods vary from decades or even up to centuries with earthquakes that are on certain faults. An earthquake’s fault usually ruptures after 50 years and if there has not been a rupture for 70 years, there is a huge possibility that one will occur as the probability can also be calculated. It is important to monitor earthquakes by keeping track of specific faults that are known to move every now and then.

The position of the country in the explosive Ring of Fire makes Alaska in danger as major earthquakes can occur at any time. “Shumagin Gap” is Alaska’s Subduction Zone fault that has not ruptured since then. However, if it does rupture, a chance of earthquake and tsunami can happen even worse than 1964. A huge earthquake with a magnitude of 9.2 happened in Alaska last March 1964. It triggered a tsunami that killed more than 130 people across three states. It was recorded as the second largest earthquake ever.

History of Earthquakes in Alaska

According to the Alaska Seismic Hazards Safety Commission, the second largest earthquake ever recorded was in March 1964 that has caused widespread damage all over the country.

In 2002, a 7.9 earthquake has struck the Denali fault in Central Alaska. Researchers have recognized for a long time that Alaska is one of the most seismically active areas around the world and experiences more earthquakes than any other region of the United States.

Over the past century, a magnitude of 6 or more earthquakes has occurred within the 150 km of November 30, 2018 quake. Over the past four years, Alaska had 5.0 magnitude quakes 6 times. The most recent quake was in the Gulf of Alaska last January 23, 2018, with 7.9 magnitudes. A magnitude of at least 6 happens over the past 100 years.

A massive earthquake of magnitude 9.2 happened in the Prince William Sound region of Alaska on March 27, 1964, exactly at 5:36 pm Alaska Standard Time. Approximately 25 km beneath the surface the quake has started to rupture. Its epicenter was at the east of the mouth of College Fiord about 6 miles or 10 kilometers, 56 miles or 90 kilometers west of Valdez, and 75 miles or 120 kilometers east of Anchorage. The heaviest and powerful earthquake ever recorded in the history of the United States and second largest instrumentally recorded earthquake lasted approximately 4.5 minutes.

Anchorage is 120 kilometers northwest of the epicenter, and it sustained the most severe damage in terms of property. Buildings were damaged beyond repair, new structures collapsed, and multistory buildings were heavily damaged. Huge landslides in Anchorage caused severe damages and the duration of the shock was estimated at 3 minutes. Displacements broke the ground into several deranged blocks were collapsed and tilted at all angles with an area of about 130 acres. Landslides destroyed more than 70 residential houses. The water, gas, sewer, telephone, and electrical systems were obstructed throughout the area.

The vertical displacement was about 520,000 square kilometers from southern Kodiak Island to Prince William Sound and trended east-west to the east of the sound. Northeast Vertical displacements ranged from 11.5 meters of uplift to 2.3 meters of subsidence relative to sea level. Uplift occurred along the southeast coast of Kodiak Island, Sitkalidak Island, and over part or all of Sitkinak Island and vertical displacement of about 13 to 15 meters off the southwest end of Montague Island. Along with the north and west parts of Prince William Sound, the west part of the Chugach Mountains, most of the Kenai Peninsula, and most of the Kodiak Island group.
The Pacific Plate that went underneath the North American Plate caused the epicenter of the 1964 Great Alaska Earthquake. Additionally, the earthquake has triggered a tsunami that caused damages and casualties from the Kodiak Islands to northern California.

A series of waves generated when earthquakes, landslides, volcanic eruptions, and large meteorite impacts a certain area is known as a tsunami. A lot of towns along the Gulf of Alaska, Alberni and Port Alberni, Canada, along with the West Coast of the United States, and in Hawaii has generated a tsunami due to the shock. 67 meters Valdez Inlet was where the maximum wave height was recorded. Minor damages along the Gulf Coast of Louisiana, Cuba, Puerto Rico, and Texas rivers, lakes, bayous, and protected harbors and waterways was also recorded on the tide. Parts of western Yukon Territory and British Columbia, Canada also felt the 1964 earthquake, not only in large areas of Alaska.

The tsunami has reached a speed of more than 400 miles per hour traveled a total of some 8,400 miles and has reached the Hawaiian Islands. Within minutes after the shaking began, it also caused at least five local slide-generated tsunamis. Generally, a slide induced tsunami is generated within a few minutes after an earthquake begins and these five occurred twice at Valdez, Whittier, Kachemak Bay, and Seward. A 30-foot slab of water demolished the original town of Valdez wherein 28 residents died. A locally generated tsunami hit Whittier, causing pain to dozens of residents. A 3,511-foot section of the waterfront slid into Resurrection Bay in Seward that created a local tsunami, causing much damage and flaming oil floating on the water. After 20 minutes, the first wave of the main tsunami arrived. Fatalities in Seward attributed to both the local and main tsunamis.

A 4.5 wave reached Prince Rupert, B.C., and the seaward coast of Vancouver Island known as Tofino and has also hit Port Alberni after 3 hours and 20 minutes that damaged and carried away hundreds of houses and private properties. Affected Canadian towns such as Hot Springs Cove, Zeballos, and Amai and caused damage in British Columbia. As the tsunami swept into Crescent City, California, the total number of deaths outside of Alaska has reached 16. The biggest wave height for that tsunami was reported at Shoup Bay, Valdez Inlet, at 220 feet. Fluctuations in bodies of water and streams took place in waterways, bayous, lakes, and harbors on the Gulf Coast of Texas and Louisiana as well as Los Angeles.

On November 30, 2018, Anchorage was struck by a 7.0 magnitude earthquake. Alaska has been experiencing aftershocks for more than 30 days. The earthquake has hit 30 miles southwest of Anchorage with a depth of 17 miles followed by a 5.8 magnitude quake afterward.

An estimated 350 aftershocks of magnitude 3.0 or higher has happened since then.

How Many Earthquakes Does Alaska Have Each Year?

According to geophysicists, one of the fastest moving tectonic faults lies in southeastern Alaska with a slip rate of more than 2 inches a year.

A magnitude of 3 or higher tend to happen in a span of a year and could reach a magnitude of 4 every week. By the end of January, the number of earthquakes might drop but it does not necessarily mean that it will completely stop.

As fragile as Alaska’s landscape may be, it is a beautiful country with breathtaking mountains and views. Like any natural occurrence, it is important to be prepared whether you are a tourist or not. Every family in Alaska are encouraged to prepare by building an emergency kit that contains food, water, fuel, and shelter just in case an earthquake strikes again. “Duck, Cover, and Hold” mantra is taught to students by hiding under desks during regular drills, and practicing evacuation drills for tsunamis.

It is important to know and be familiarized with the location and to plan for evacuation. Secure objects and items that can be grabbed as quickly as possible just in case an earthquake happens. Stay indoors and get under a bed, desk, or table, and cover your head as soon as possible for safety and protection. On the contrary, go near an interior wall, get on the floor, and cover your head if there is nothing to hide under. Avoid going near windows, large appliances, or cabinets.

Is the Big One Coming?

An earthquake that occurs with a 7.0 magnitude or more is commonly known as the Big One.

Truth be told, earthquakes are not easy to be predicted precisely as scientists and researchers cannot exactly pinpoint when and where a Big One will occur.

Alaska measures the shaking across the region when earthquakes occur, and this is how they can assess the potential impacts of it and what type of emergency response is most effective. Earthquakes are part of nature and are inevitable and unpredictable, which is why it is important for people to understand how, when, and where it happens.

Filipinos in Yukon 'hunker down,' and skip the annual trip to visit relatives

Yukon to send COVID-19 vaccine doses to nearby Atlin, B.C.