This may be the first time data collected using uncrewed surface vehicles were used to help produce an annual estimate of abundance for a commercial fish stock.

Every other year, NOAA Fisheries conducts an acoustic-trawl survey from crewed research vessels to measure pollock abundance in Alaska’s eastern Bering Sea. As a result of COVID-19, many research surveys were canceled, and we weren’t able to conduct our walleye pollock surveys. Data collected from these surveys are critical to manage pollock, which comprise the nation’s largest commercial fishery.

NOAA Fisheries scientist Alex De Robertis at the Alaska Fisheries Science Center developed a contingency plan: conducting the survey with saildrone wind- and solar-powered ocean-going robots. The hope was to collect some data despite the vessel survey cancellation.

For the past several years, De Robertis and colleagues at the Alaska Fisheries Science Center have been working with partners at NOAA Research’s Pacific Marine Environmental Laboratory,  Saildrone and Kongsberg. They use uncrewed surface vehicles equipped with low-power sonar (acoustic) sensors to conduct research in the Bering and Chukchi Seas. The pollock survey contingency plan was an opportunity to apply what they had learned to collect data for resource management.

“We were impressed with how well the saildrones performed. This was particularly helpful in a year when there are no other sources of survey information for pollock,” said De Robertis. “From a technical standpoint things went as well as one could have hoped. The saildrones and the acoustic equipment we use to count fish performed flawlessly while at sea for five months.” 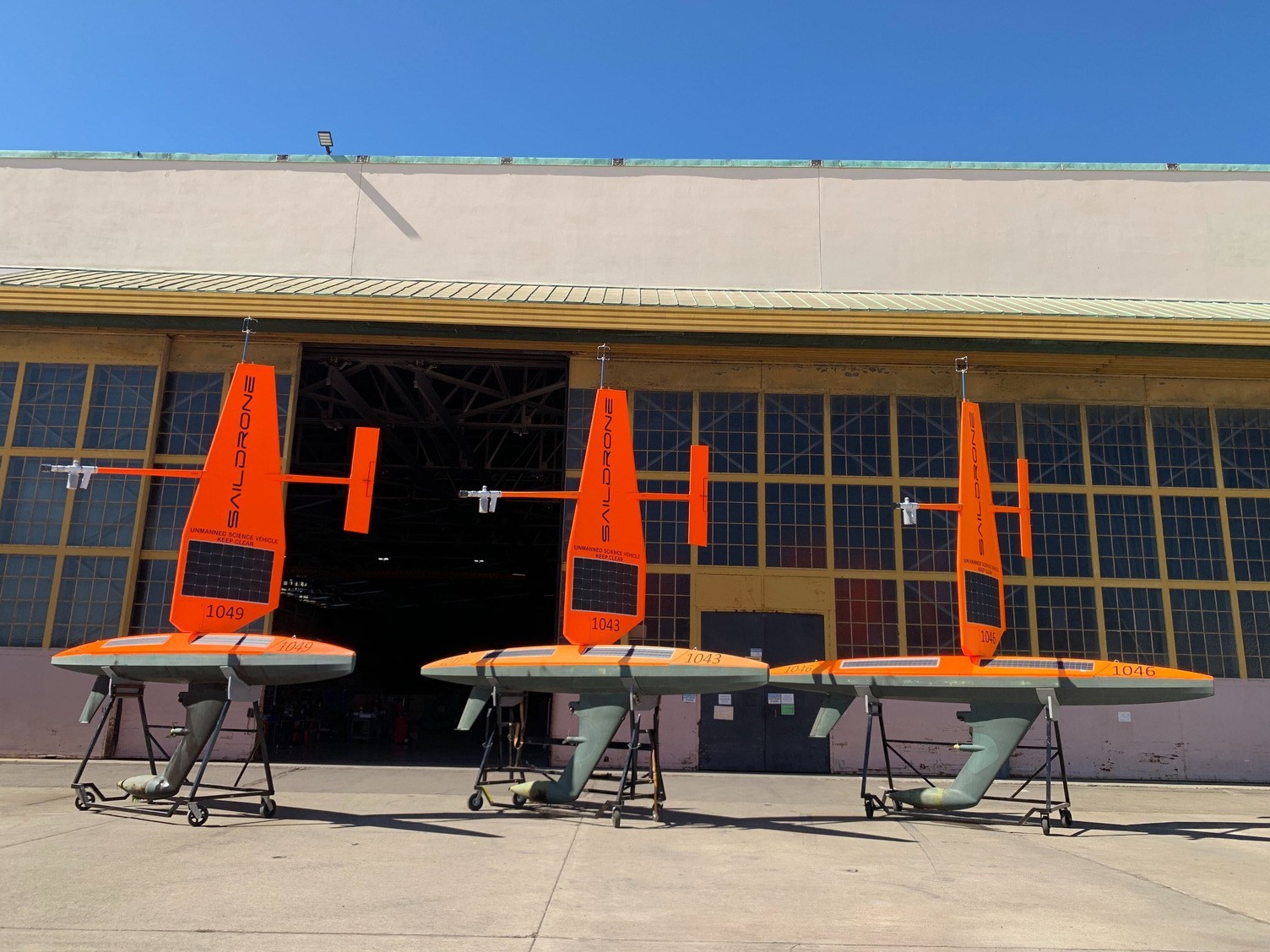 Three saildrones were used to conduct the survey. They left California in mid-May and sailed 2,200 nautical miles to the Bering Sea. From July 4 to August 20, the saildrones were able to survey the area typically covered by the standard research vessel. They collected information to estimate pollock abundance and oceanographic and atmospheric information for weather forecasting.

After the survey ended, the saildrones sailed back to Alameda, California—Saildrone Inc. headquarters. Under a time crunch, data were downloaded and sent to De Robertis and other NOAA Fisheries scientists for processing and analysis as soon as the vehicles arrived. 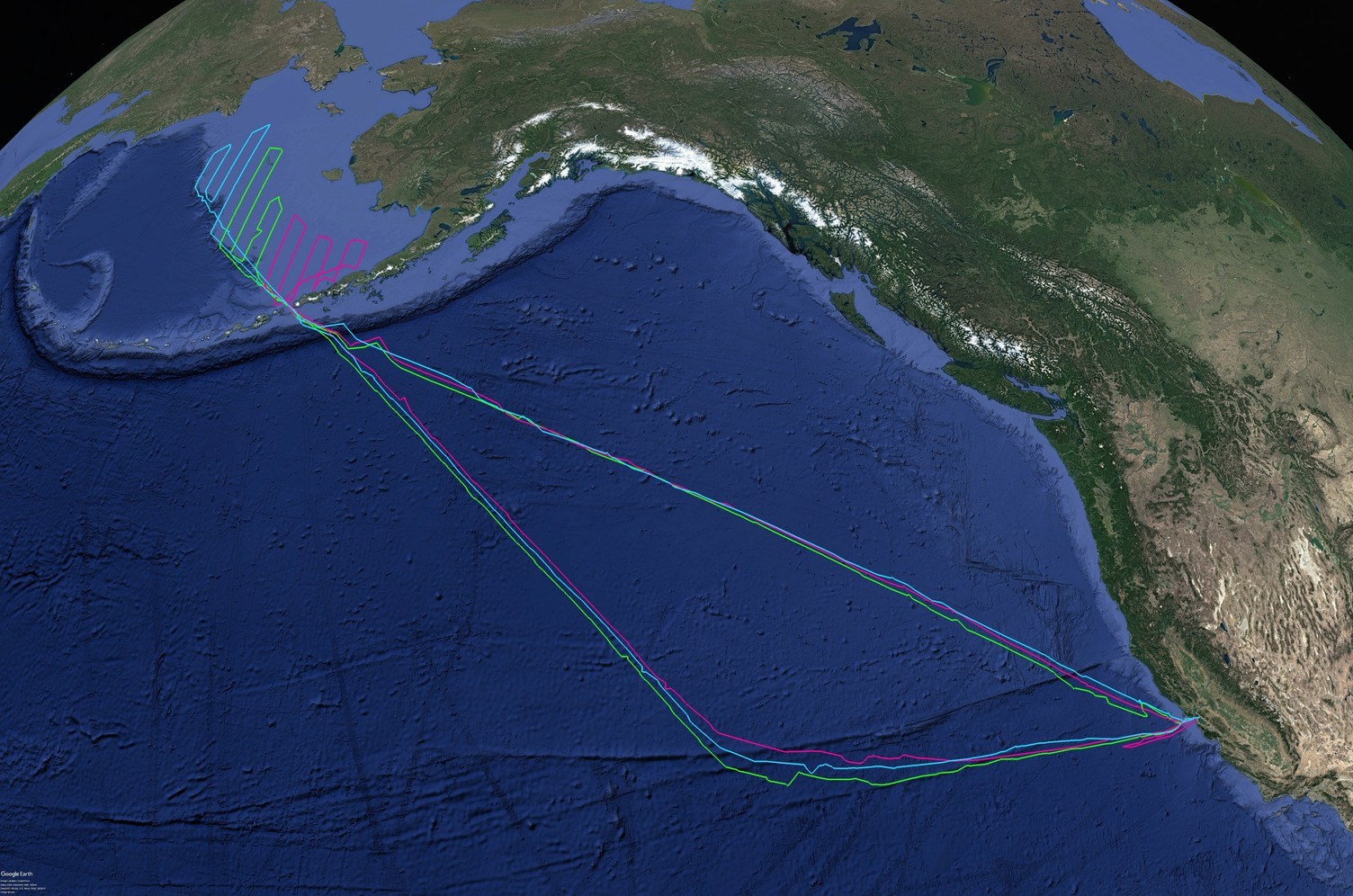 Survey track for the saildrone fleet in the Bering Sea. Other lines mark sail to and from Alameda, California. Figure: NOAA Fisheries.

“We received the data in mid-October. We only had four weeks to analyze them and determine whether they could be incorporated into the stock assessments used to estimate pollock abundance in this area of the Bering Sea,” said De Robertis.

The analysis was needed in time to inform scientific discussions that occur with the North Pacific FIsheries Management Council every year in mid-November. This is when annual assessments of commercial fish stock abundance and trends (whether abundance is going up or down) in the Bering Sea, Aleutian Islands, and Gulf of Alaska are completed. Resource managers rely on these assessments to develop fishery management measures for the upcoming fishing year.

Example of a 100-minute backscatter record from the 2020 saildrone survey. Pollock aggregations are abundant at > 40 m. Credit: NOAA Fisheries.

For De Robertis and his colleagues, the goal was to be able to use data collected by uncrewed surface vehicles for the first time in the pollock assessment. They were successful. Scientists were able to derive an estimate of abundance for midwater pollock based on the observations made by the saildrones. The total biomass (weight) of midwater pollock was 3.6 million metric tons. This is about 45 percent higher than in 2018, the last time a NOAA research vessel-based acoustic-trawl survey was conducted. The assessment model combined this survey with other sources of information (e.g. projections of the on-bottom portion of the stock and the age structure of the population). Overall, it indicated that pollock populations declined by roughly 14 percent from 2019 to 2020.

Scientists processed the data using the same methods used for conventional acoustic data collected on ship-based research surveys. However, they also had to contend with a few challenges specific to the saildrone data.

With less reliable and detailed information to work with, scientists had to account for greater uncertainty in the data. 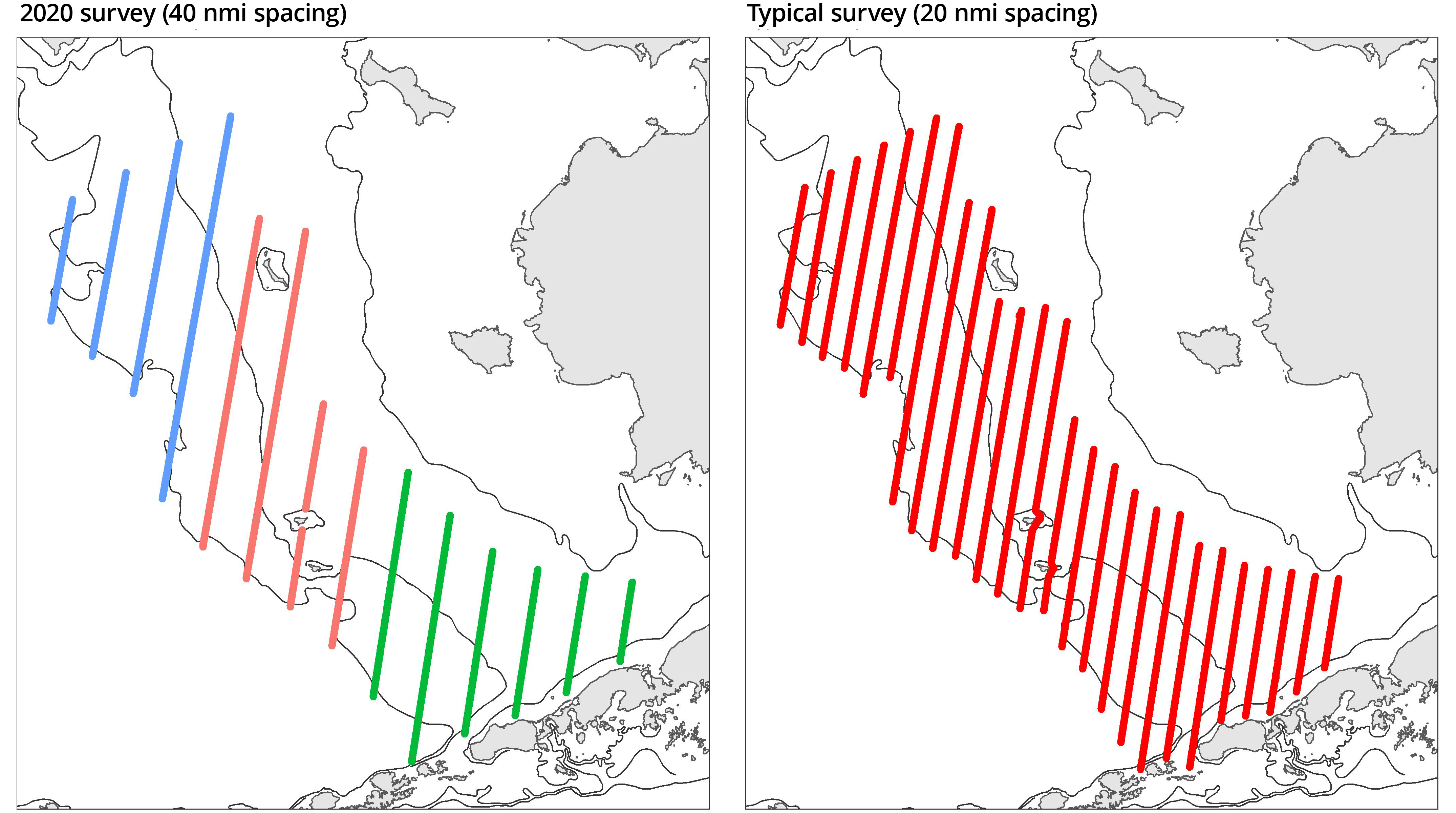 The three saildrones (plotted in different colors) split up and each surveyed a sector of the Eastern Bering Sea along transects with a 40 nm spacing, as opposed to Dyson’s typical 20 nm spacing. Credit: NOAA Fisheries.

Scientists used models to estimate the additional uncertainty due to the reduced amount of sampling. They developed methods and used biological data collected in past surveys to convert the observed backscatter to pollock biomass. They also applied a method to estimate and adjust for the proportion of fish near the seafloor that were missed by the saildrone’s wider beam.

Pollock are the most common midwater fish species found throughout the Bering Sea. Pollock dominates (approximately 98 percent by weight) catches in previous NOAA Fisheries surveys. Pollock also dominated the catch of pollock trawlers in 2020 and previous years. As a result, it wasn’t as essential to have biological samples to verify the catch.  While it was possible to estimate the total biomass of pollock reasonably well with saildrones, it was not possible to collect important biological data to estimate the size or age of the population. These are key pieces of information used in fisheries management.

“It was great to be able to put what we have developed to practical use in a very challenging situation.  We were able to achieve our goal to provide some survey estimates of pollock abundance in the Bering Sea this year to support resource management decisions,” said De Robertis.

While not a substitute for the full spectrum of tasks that crewed research vessel surveys can undertake, the technology proved to be highly effective in an unusual year. This is an area that is developing rapidly. Going forward, ocean-going robots with scientific sensors like the ones used in this study are likely to be used more broadly. Scientists will be looking for other ways to use these emerging technologies to support fisheries management.

Funding for this project was provided by NOAA’s Office of Science and Technology.

By Sonia Nagorski For the Juneau Empire A recent study linked the fall of the Roman Republic in 43 AD to the eruption of one of Alaska’s Aleutian volcanoes. The fallout from Okmok volcano circled the...
Read more
Nature & Outdoors