Kalifornsky Kitchen has a special guest this week. Megan Pacer, who covers happenings on the Southern Peninsula for the Homer News, is weighing in on Cornish pasties with me.

Growing up, these savory hand pies were a staple. My grandma and mom would make them in big batches and freeze them, popping them in the oven for a quick and easy meal. My grandma makes them her way, and my mom another way. In my great-grandma’s recipe book, the pasties recipe is titled “Stacy’s Cornish pasties,” since my mom enjoyed them the most when she was growing up. That old family recipe is different than the pasties I grew up eating, which was much more streamlined with ready-made ingredients and other hacks (all of which I won’t advise).

My paternal great-grandparents are responsible for making the pasties a family tradition. My great-grandfather served a mission in Cornwall, England, when he was young, in the early 20th century. While there, he ate a ton of Cornish pasties. Apparently he became so obsessed he needed the recipe so he could eventually make them in the kitchen of his Anchorage homestead. My grandpa liked to dip his in ketchup. My mom was a little bit more freeform with what the filling was made of — everyone has put their own spin on it.

A traditional Cornish pasty, as you might find in Cornwall, features a filling of beef, potato, turnip or rutabaga and onion, seasoned with salt and pepper, and baked inside a shortcrust pastry pocket. They originated with local miners, who would thaw them in their pockets during the beginning of their shift and eat them during their break. A long time ago, the hand pies were actually packed with two fillings, one savory and one sweet. Sort of like Willy Wonka’s three-course-dinner gum.

When I was a kid, barely any of my peers knew what a pasty was. It’s basically meat and bread, so it’s not that difficult of a concept for American children, but the name and style is still somewhat unfamiliar for some. I’ve only found a couple of places that sell them, including the Talkeetna Roadhouse and the Pie Stop in Anchorage. The Roadhouse has creative varieties, like a patty-melt version and one filled with smoked salmon and wild rice (my personal favorite). When I met Megan, who hails from the Midwest, she knew exactly what pasties were all about. For this week’s column, I invited her to make and write about these savory hand pies with me.

I think a Cornish pasty can be a great blank slate. Very easy to make vegetarian, and to incorporate your favorite flavors. If you need inspiration, I recommend watching the “Great British Baking Show” episode where they chose Cornish pasties as a signature challenge. So many of the contestants chose flavors from around the world that worked really well in the very British hand pies.

For the pastry: In a mixing bowl, whisk together the flour and salt. Cut tiny pieces of the shortening and toss it evenly across the flour and salt mixture. Next, cut the shortening into the flour, which is basically like pressing each little glob of fat into the flour until you have a coarse and crumbly mixture. Slowly flicking water on the mixture, the pastry will hydrate and you can force the crumbs into a dough by kneading it. Once the dough comes together, split into six pieces, wrap them with plastic wrap and chill.

For assembly:Preheat the oven to 400 degrees. Roll each chunk of dough into a circle about 8 inches across. Plop a half a cup of filling into the center of the pastry dough circle. Brushing the edges of the dough will help the sides stick together. Bring opposite sides of the dough circle together, and pinch them together to create a crimp, enclosing the filling. Bake for 15 minutes, then reduce the temperature to 350 degrees, bake for an additional 25 to 30 minutes.

Turning to rural northern Michigan, the Cornish pasty has had deep roots since its creators brought it with them across the sea. Let me back up. I’m Megan, a reporter at the Homer News, where we sometimes publish this food column. I’m also an occasional column writer and even more occasional cook, but never a food column writer. Victoria, a cherished friend, was kind enough to invite me to crash this particular column due to my upbringing in the Upper Midwest, where the pasty reigns supreme as a staple in local cuisine.

We all know (well, those of us who know pasties) that the meal was popularized in Cornwall but that its origins before that are murky at best. French cookbooks dating back to around 1300 contain recipes for pasties, which even then could be made with salmon, venison and other varieties of meat.

Pasties resemble a turnover, and have similarities to the empanada, but the Cornish version that later became threaded into the fabric of life in Michigan’s Upper Peninsula must contain these basics: beef, onion, potato and rutabaga (called swede or turnip in Cornwall). This is the version that Cornish miners and their families brought with them to northern Michigan, where in the 1840s they helped develop the iron ore and copper mines that would sustain the region for years. The immigration of Cornish miners was soon eclipsed by that of the Finns and Swedes, but their tasty and practical pasty took hold among the mining community and later spread across northern Michigan and Wisconsin as a commonplace dish. Its crimped crust edge in particular proved handy for miners breaking for lunch, whose dirty hands could grasp the meal by the crust without contaminating the rest, and then discard it.

When I say I grew up eating pasties, I don’t just mean periodically or for special occasions. My small Upper Peninsula town near the Wisconsin border ran on the things. Three different pasty-making operations can be found within about a 30-mile radius, and they were served weekly in the cafeteria of my K-12 school. While the Upper Peninsula has remained relatively true to the traditional recipe introduced by the Cornish miners, there are several schools of debate on how to make and eat a pasty that are hotly debated around dinner tables throughout northern Michigan. One rule that most everyone seems to agree on is that the proper condiment to compliment a pasty is ketchup. A square of butter on top of a hot pasty is less usual, but safe, while gravy is asking for an argument. Many people add carrots to their regular beef, onion, potato and rutabaga combination, though this is not strictly traditional. And, of course, when it comes to straying from the Cornish path, there is no shortage of creative things to do with a pasty.

The use of venison in place of beef in my hometown is not uncommon and in fact makes sense, given the prevalence and popularity of deer there. Subtract the meat and add more vegetables for a vegetarian option, toss in some jalapenos for heat, or go rogue and make a pizza pasty. The variations are endless. On a recent trip home for Christmas, I made pasties with my mother for the first time. I’ve only been making them myself for a year or two now.

They appear frequently in my dad’s diet, so my mom was excited to learn how to make them at home. We stuck to the traditional Cornish recipe, save for added carrots, a few extra spices and jalapenos sprinkled on the top of half the batch (for Dad). The dough seems to do something slightly different each time I make it. My advice is to start the dough in the morning and let it rest until the afternoon, or to prepare it the night before to make sure it’s workable when it comes time to assemble the pasties.

Without further ado, a humble, simple offering from a Yooper* with a pasty problem:

* Slang for a resident of the Upper Peninsula of Michigan.

1 pound chuck or round steak

1 onion, chopped (I prefer a red onion, but white is traditional)

1) Combine the flour and salt in a large bowl. Cut in the shortening until the mixture resembles coarse crumbs. Stir in the water until mixture forms a ball. Wrap in plastic and refrigerate

3) In a large bowl, combine the meat, potatoes, onion and rutabaga (and carrot and jalapeno, if included). Season with salt, pepper, paprika, turmeric and oregano (or your favorite spices).

5) Fold over the other half of the dough, seal the edges and crimp (with a finger or a fork). Prick the top of the pasties with a fork and place on a baking sheet. 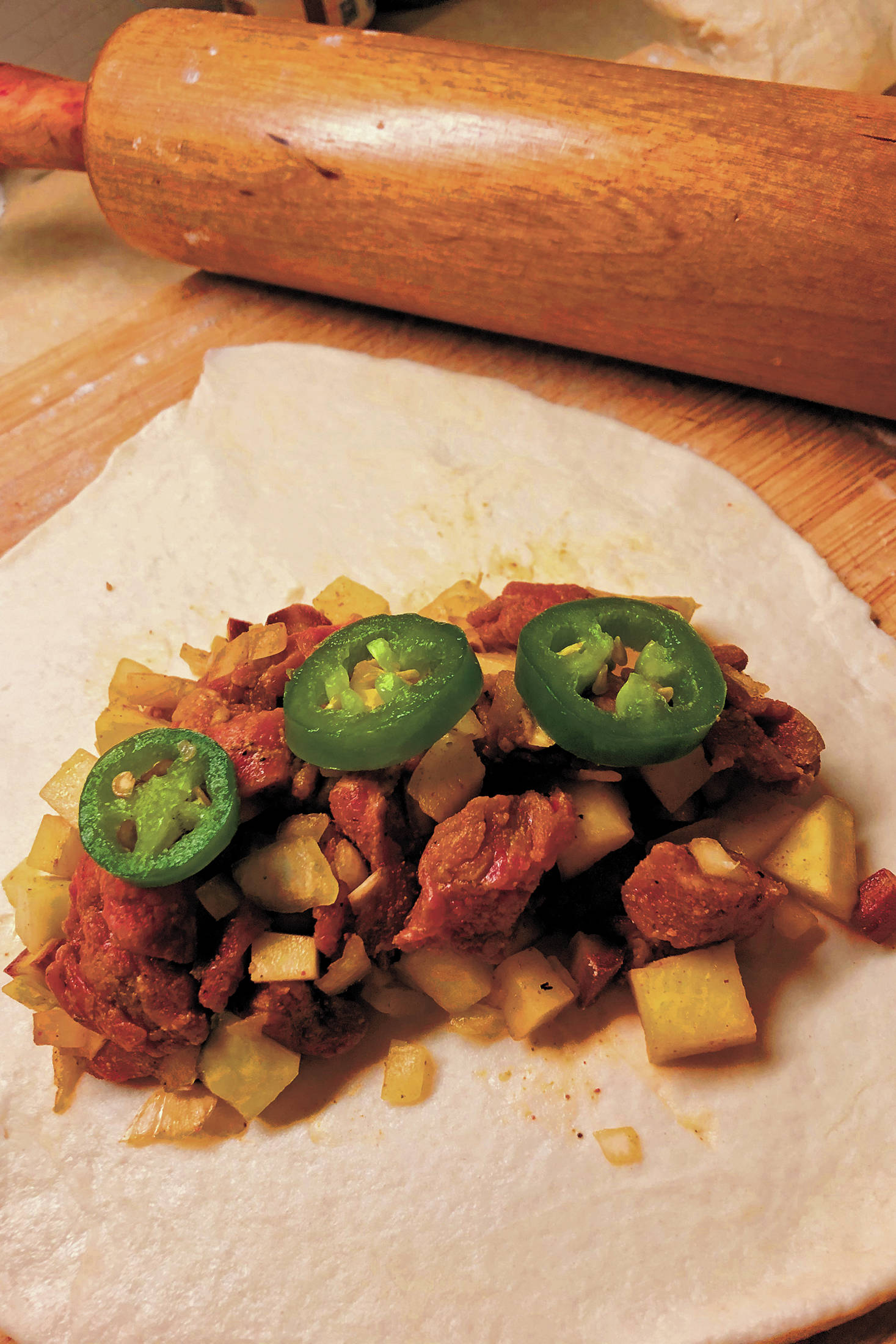 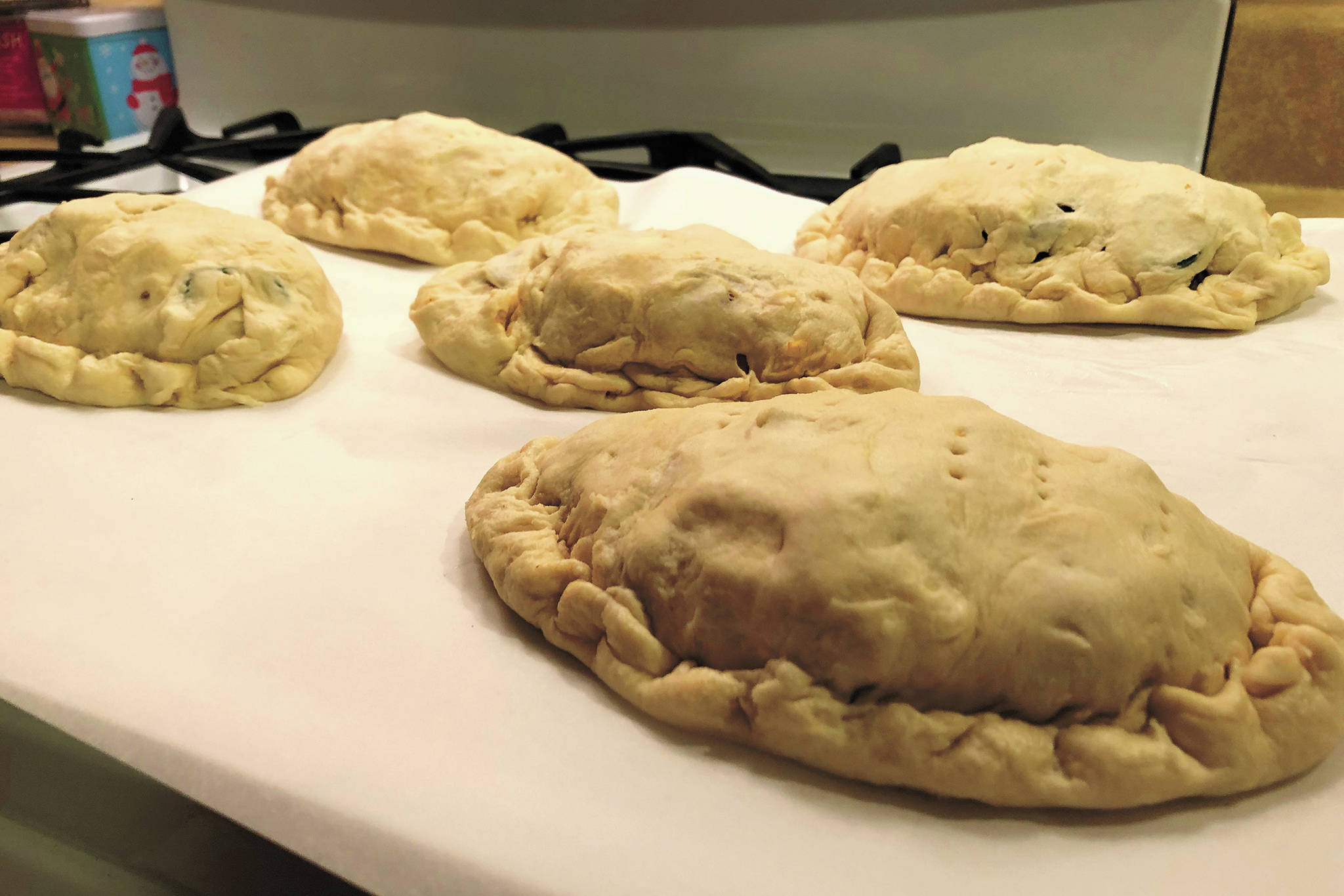 The dough for this batch of pasties was stickier than usual, resulting in less than perfect formation and crimping, seen here Christmas Day, Dec. 25, 2020 in Crystal Falls, Michigan. An example of substance over style. (Photo by Megan Pacer/Homer News) 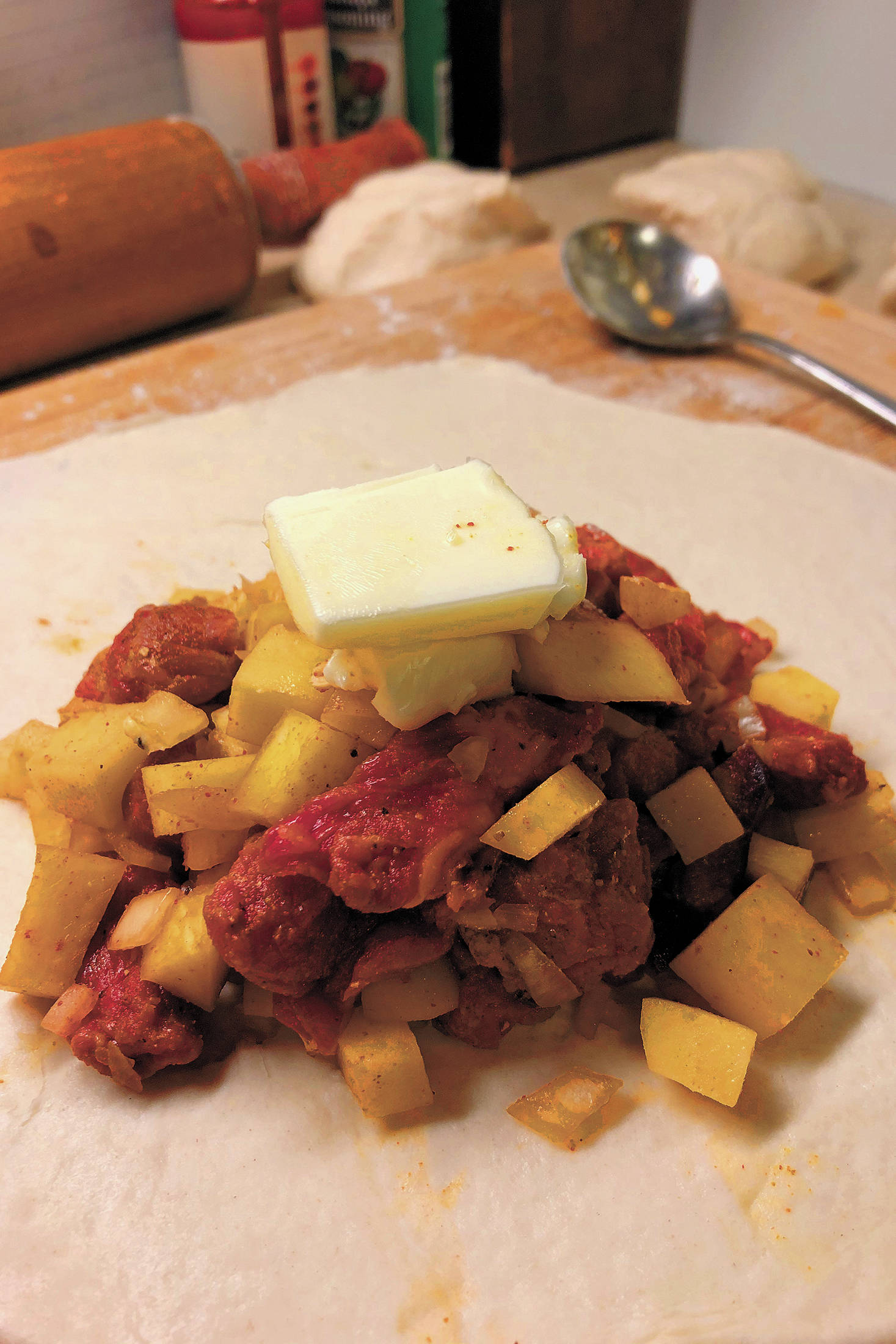 A dollop of butter or margarine on top of the filling before baking a pasty can never hurt, as seen here on Christmas Day, Dec. 25, 2020 in Crystal Falls, Michigan. (Photo by Megan Pacer/Homer News)

Silk: A history and look at how historical figures have inspired us over the years

Synonymous with indulgence and elegance, silk has been the luxurious material of choice for princesses, emperors and film stars alike over many millennia. This luminous, pearlescent fabric has a richer history than you may...
Read more
Lifestyle

How to go palm oil free in your bathroom

Words by Rebecca Bennett, founder of The Solid Bar Company If you’re one of a growing number of people boycotting palm oil products, you’ll know it’s not an easy feat, with palm being the most...
Read more
Lifestyle

The art and science of anti-ageing: We find out how renowned physician Dr. Thomas Szulc is providing anti-ageing care at his practice

Words by Eve Glover Originally from Poland, Dr. Thomas Szulc has travelled across the globe, working extensively with other pioneers in holistic medicine to incorporate cutting edge modalities and technologies into his practice, the New...
Read more
Lifestyle

It’s luxury, but not as we know it: How luxury brands are embracing new digital platforms and media

Words by Lidi Grimaldi, managing director at Interbrand Milan For so long, luxury brands have been associated with heritage, traditional fashion houses and established orthodoxy of quality and artistry. It is this reliability and implicit...
Read more
Facebook