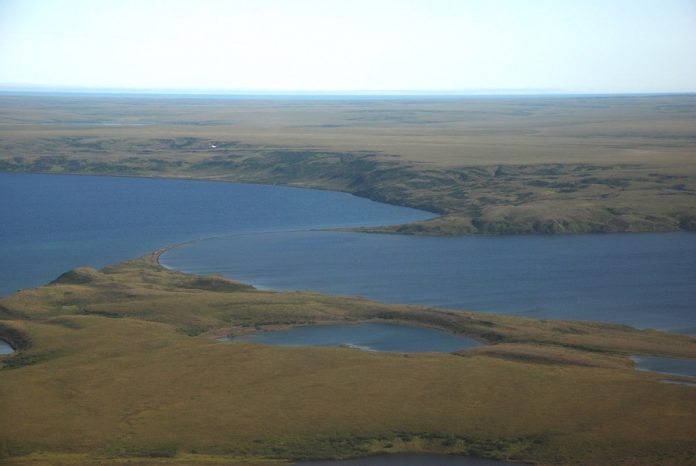 Volcanic eruptions on the Seward Peninsula formed maars, like Devil Mountain Maar pictured here, that are larger than those found anywhere else on Earth. NPS photo.

Volcanoes in Alaska are most often associated with the Ring of Fire, which stretches from the Aleutians along the state’s southern coast through the southeast panhandle. So it may be a surprise to learn there are expansive lava flows in the Bering Land Bridge National Preserve on the Seward Peninsula.

These are the northernmost volcanic features in North America that were created during the last ice age. When scientists studied these lava flows, they discovered an entirely new type of eruption.

Yukon cider being recalled due to potential health risk

Project to build 3 RCMP detachments in Yukon $6M over budget

'Outraged': Beaver Creek residents upset by couple who flew to Yukon, got vaccinated

Women jump on attacking lynx to save dog in Beaver Creek, Yukon

Reducing the carbon footprint of the travel industry

Businesses in the tourism sector are taking steps to reduce the carbon footprint of the travel industry. Photo by Noah Buscher on Unsplash According to research published in the scientific journal Nature Climate Change,...
Read more
Travel

A kayaker plies the waters around the bergs at Bear Glacier Lagoon, one of fourteen hidden Alaska destinations. Photo by Doug Demarest, alaskastock.com You’d expect a destination that’s 2.5 times the size of Texas...
Read more
Travel

Illustration by Tim Bower. Q: I want to bring authentic gifts to my family in the Lower 48, but I’m on a budget. What should I buy? A: Bringing gifts every time I travel...
Read more
Facebook