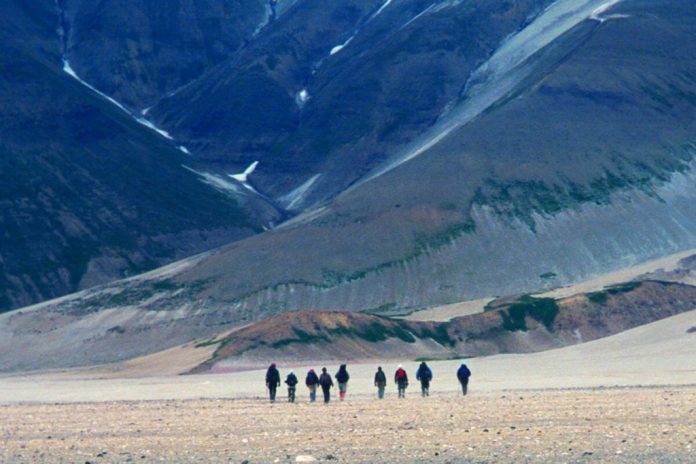 On a fine June day about 100 years ago, in a green mountain valley where the Aleutians stick to the rest of Alaska, the world fell apart.

Earthquakes swayed the alders and spruce. A mountain shook, groaned, and collapsed in on itself, its former summit swallowing rock and dust until it became a giant, steaming pit.

About 6 miles away, hot ash began spewing from the ground in a colossal geyser. During an eruption that lasted three days, one of the most vibrant landscapes in Alaska in 1912 became the gray badlands known as the Valley of 10,000 Smokes.

The great eruption that created the

'We are for Palestine': Residents gather for rally in Whitehorse

NASA’s annual maintenance visits to Poker Flat Research Range have resumed after a year off due to the COVID-19 pandemic, with big projects this year including removal of a little-used launcher and the...
Read more
Nature & Outdoors

By Ned Rozell Greenup — the great, silent collective explosion of freed tree buds that had been frozen all winter like a clenched fist — will happen any day now in Fairbanks. The phenomenon...
Read more
Nature & Outdoors

Pride of Bristol Bay: A Conversation with Jerry and Caleb Jacques about their grizzly family

By Bjorn Dihle When Jerry Jacques was 17, he ran away from California and hitchhiked to Alaska. He had heard stories of his great-grandfather and grandfather prospecting, trapping and living in the far...
Read more
Nature & Outdoors

On The Trails: Finding rosy-finches and some excitement

By Mary F. Willson For the Juneau Empire After hearing about the flocks of migrating songbirds out on the wetlands, I ambled out there and found longspurs and buntings, but I missed seeing...
Read more
Facebook