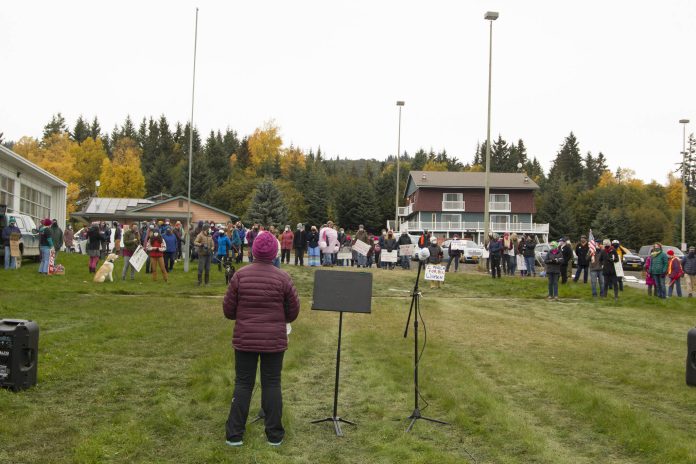 More than 100 Homer community members gathered at the HERC Campus mid-day Saturday to rally in support of women’s reproductive rights. The demonstration was a part of the national movement “Rally for Abortion Rights,” which spurred from new abortion laws in Texas, which ban abortions after the sixth week of pregnancy, before many women even know they’re pregnant.

According to The Washington Post, more than 600 rallies were planned across the country on Saturday, including Soldotna and Anchorage.

The march began at the HERC Campus with speakers sharing testimonies about the importance of access to health care, including sex education, birth control and abortions. The group then marched to

It's almost like a custom-designed trap — easy to get in, and tough to get out.But when a couple of deer ended up stuck in the bottom of the slippery, rubber-lined pit on Monday,...
Read more
Artic News

A small metal rod stands tall at kilometre 1456 on the Alaska Highway, as the land behind it starts to collapse from permafrost thaw. It's the first device of a new alarm system that will tell...
Read more
Artic News

TANACROSS — One Alaska Native village knew what to do to keep out COVID-19. They put up a gate on the only road into town and guarded it round the clock. It was the...
Read more
Facebook