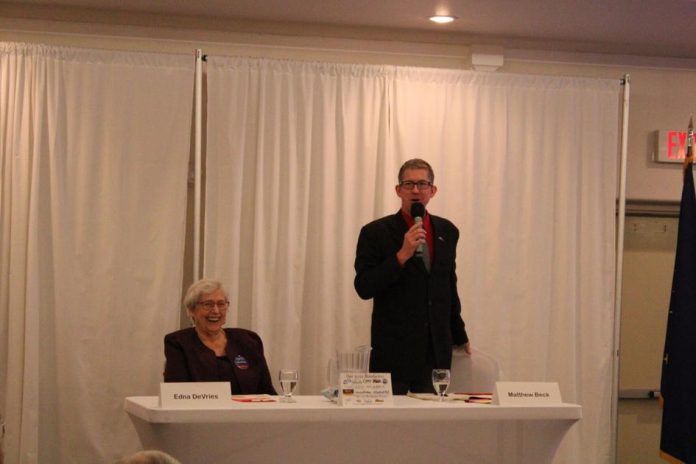 The lunch forum was sponsored by both the Greater Wasilla Chamber of Commerce and the Palmer Chamber of Commerce and moderated by Marty Metiva. Former Wasilla Mayor Bert Cottle recently withdrew his candidacy for Borough Mayor, leaving former Mat-Su Borough Assemblyman and Deputy Mayor Matthew Beck and current Mayor of Palmer Edna DeVries to participate in the forum on Tuesday. Questions were submitted by members of the crowd that were in attendance and answered by both candidates in opposite order for each question for nearly an hour. DeVries responded to a question about her most impactful achievement during her most recent term in office as Palmer’s Mayor.

What is a hate crime? “In the simplest terms, a hate crime must include both ‘hate’ and a ‘crime,'” the DOJ reports on its website. It’s a criminal offense against a person or...
Read more
Around Anchorage

Testimony Tuesday: The public continues to tell the Assembly to stop its mask mandate

A retired nurse told the Anchorage Assembly that the masks the general public is wearing, and the way they are wearing them, is completely ineffective in stopping the spread of the Covid-19 virus. They...
Read more
Around Anchorage

On Tuesday, Mayor Dave Bronson announced that the Municipality of Anchorage, in partnership with WEKA Medical, has started a new Covid-19 treatment center to provide vaccinations, testing, and monoclonal antibody (mAb) treatments. “This will drastically increase our...
Read more
Around Anchorage

For Assemblyman Chris Constant, there is no ‘God’ in Pledge of Allegiance

Anchorage Assembly Vice Chair Chris Constant, when asked by Assembly Chair Suzanne LaFrance to lead the Pledge of Allegiance on Oct. 5 before the Assembly took public testimony, could be heard leaving out the...
Read more
Facebook