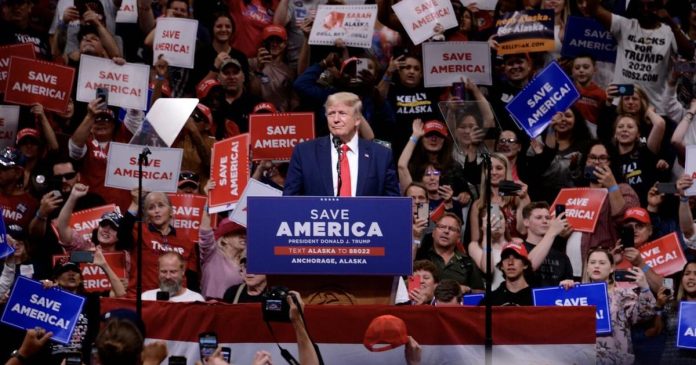 In front of more than 5,000 cheering supporters at the Alaska Airlines Center in Anchorage, former President Donald Trump fulfilled a year-old promise to campaign in Alaska against incumbent U.S. Sen. Lisa Murkowski, one of seven Republicans who voted in favor of his conviction following the Jan. 6, 2021, insurrection that targeted Congress.

With a 90-minute speech that included a story about a trip to Iraq, conversations with foreign leaders and his thoughts on a variety of issues, Trump endorsed Murkowski’s lead Republican challenger, Kelly Tshibaka, in this year’s U.S. Senate election.

'It's just a scary situation': Yukoners react to being on evacuation alert as fires continue to burn

Previous article'It's just a scary situation': Yukoners react to being on evacuation alert as fires continue to burn
Around Anchorage

On June 30, Capstone Clinic had initially closed its COVID testing facilities across the state.“As a result of the ending of federal and state reimbursements, we were forced to shut down our testing...
Read more
Around Anchorage

Planned Parenthood Alliance Advocates Alaska is holding events in Anchorage, Fairbanks, Homer and Juneau on Saturday focused on abortion access advocacy.The goal of the events is “so that people know how to get...
Read more
Around Anchorage

The state agency that led Alaska’s response to the COVID-19 pandemic has been dissolved. As of Friday, the Alaska Department of Health and Social Services is now two separate agencies: the Department of...
Read more
Facebook