By Matt Buxton The Midnight Sun 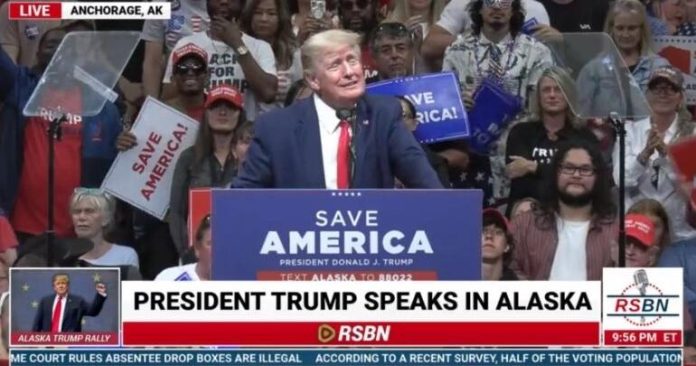 Former President Donald Trump rallied the troops in Anchorage this weekend in support of Republican candidates Kelly Tshibaka and Sarah Palin in an event that was pretty much what you’d expect for a Trump rally in 2022. There were election conspiracy theories, conservative grievance, demonization of the Other, plenty of flag waving and a guest appearance from the My Pillow Guy. Hopefully you spent the day doing literally anything else.

Far away were any of the recent revelations that Trump had a more active and knowing role in the January 6 insurrection than previously thought, replaced with the ongoing fantasy that Trump lost the 2020 election because of a

A new report examines the health status of Black Alaskans, summarizing disparities that create chronic problems for a demographic that comprises 3.4% of the state population, as well as some positive trends that...
Read more
Around Anchorage

Kelly Tshibaka has done everything to attach herself to Donald Trump, currying his favor by repeating his lies about the results of the 2020 election.Alaska news organizations have failed to examine Tshibaka’s two-year...
Read more
Around Anchorage

In front of more than 5,000 cheering supporters at the Alaska Airlines Center in Anchorage, former President Donald Trump fulfilled a year-old promise to campaign in Alaska against incumbent U.S. Sen. Lisa Murkowski,...
Read more
Around Anchorage

Alaska’s state alcohol regulator is declining to stop distilleries from selling kegs of premixed cocktails despite a warning by federal regulators, who have concluded that the process is illegal.Last week, the Alaska Alcohol...
Read more
Facebook