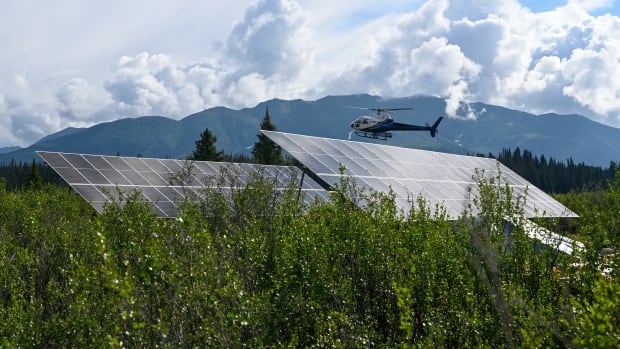 A new solar array and battery storage system is up and running at a remote mining exploration camp in eastern Yukon.

The 64-panel system is capable of meeting 90 per cent of the camp’s electricity needs, according to Steve Rennalls, operations manager at Snowline Gold, the junior exploration company on whose property the system is located, which falls within traditional territory of the First Nation of Na-Cho Nyäk Dun.

Until now, the 45-person camp depended on diesel generators for electricity – not only a costly endeavour but a noisy and environmentally unfriendly one, he said, noting that as much as 12,570 litres of diesel fuel will be displaced every year thanks

Deciduous trees are expanding in several areas of Yukon because of effects linked to climate change, according to new research.Kirsten Reid, the lead author of a study published in Environmental Reviews, told CBC News that drought, wildfire...
Read more
Artic News

The Yukon government is working on a community safety plan around the Whitehorse emergency shelter in response to concerns raised by area businesses of increased public intoxication, drug use and violence in the area.Walter...
Read more
Artic News

The Kenai Peninsula Borough School District’s support staff are getting raises this school year. The board of education Monday approved the pay hikes in an agreement with the union that represents those employees. The...
Read more
Facebook