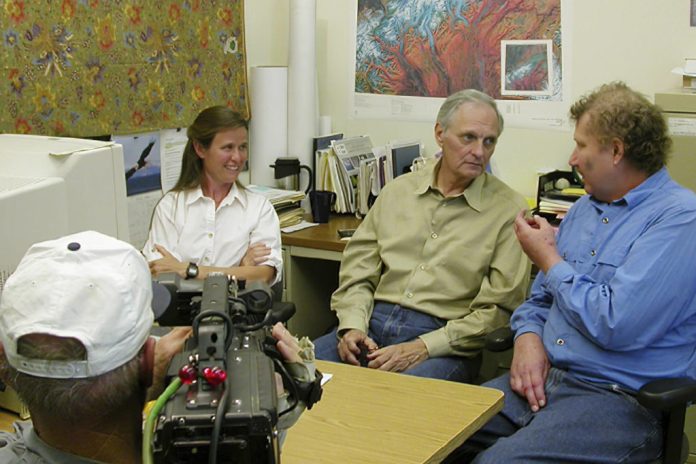 Alan Alda, the actor and host of PBS television’s “Scientific American Frontiers,” recently traveled to Alaska on a mission to interview scientists about the changing North.

Alda and the show’s crew gathered footage and scientist’s opinions for “Hot Times in Alaska,” a program scheduled to air on PBS in 2004. Along the way, they asked good questions, heard frank and scary answers, and carried the message of Alaska scientists to a broader audience.

One of Alda’s first stops was the International Arctic Research Center at the University of Alaska Fairbanks. There, Alda visited Gunter Weller, a northern meteorologist and the director of the Center for Global Change and Arctic

Scientist Jesse Conklin holds a Bar-Tailed Godwit chick not far from Nome. This was about a month before the bird embarked on an 8,425-mile nonstop flight to Tasmania that took 11 days without...
Read more
Nature & Outdoors

Alaska Science Forum: 750 miles per day for 11 days, no rest

A bird the size of your fist has made humans all over the world marvel at the things we can’t do. Like fly. For 11 days straight, from Alaska to Tasmania, your toes not...
Read more
Nature & Outdoors

I Went to the Woods: Value appreciation

Around sixth grade, Dad recommended I get Mom something carved by Jon Rowan for her birthday. So the next day at school I talked to Jon. He was carving a compact killer whale bowl...
Read more
Facebook