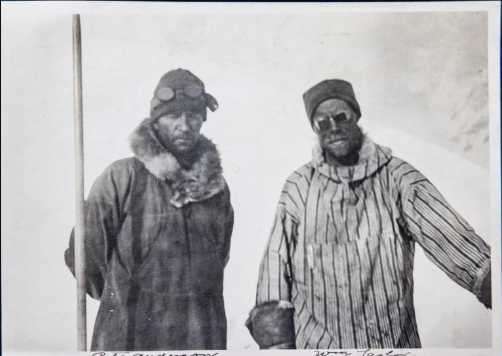 This photograph at about 14,500 feet looks down what today is known as Harper Glacier. The shadow of a climber’s head and alpenstock in the lower right indicate the time was about 4 pm. This photo is mislabeled as March 1911. Archive photo.

Photographs found by UAF Geophysical Institute professor Matthew Sturm in the university’s Rasmuson Library archives in October show the climbing party at about 16,500 feet — far higher on the 20,310-foot mountain than previously seen.

Trail Mix Inc. is gearing up for its annual fundraiser, and executive director Ryan O’Shaughnessy said he’s looking forward to being able to host the event back in person. “We were online for the...
Read more
Nature & Outdoors

I Went to the Woods: Really skilled or really lucky

We entered the muskeg peppered with small cedar trees and lousy with salal. I know devil’s club probably has the worst reputation for being viciously annoying, but patches of unreasonably noisy salal might be...
Read more
Nature & Outdoors

Scientist Jesse Conklin holds a Bar-Tailed Godwit chick not far from Nome. This was about a month before the bird embarked on an 8,425-mile nonstop flight to Tasmania that took 11 days without...
Read more
Nature & Outdoors

Alaska Science Forum: 750 miles per day for 11 days, no rest

A bird the size of your fist has made humans all over the world marvel at the things we can’t do. Like fly. For 11 days straight, from Alaska to Tasmania, your toes not...
Read more
Facebook